It’s here: the first edition of #fetchfriday!  Every (or most) Fridays, I’ll talk about someplace new, fun and of course, fetch-friendly.  As we explore new places, I’ll also continue to add to the Parks Directory.

Today’s post is about the “new” Mainland Common Off-Leash Park.  I say “new” because it’s actually been open for about ten months.  This is one of the only public fenced-in dog parks in the City.

Following controversy surrounding the use of the historic Africville area for an off-leash dog park, the decision was made to make Africville Park on-leash only.  But the deal was that Africville Park wouldn’t  lose its off-leash status until a suitable replacement was created.  Which brings us to the construction of the Mainland Common Off-Leash Park.

The Park is situated in Clayton Park adjacent to the Mainland North Linear Trail which spans from Fairview to Kearney Lake.  For details on how to get there, visit the trails directory listing here.

As far as fenced-in off-leash dog parks go, the Park is a decent spot. There is an open section for fetch, a pretty wooded area for strolling, and a separate area for small dogs only.  There is even a rain barrel for filling up your dog’s water  dish. 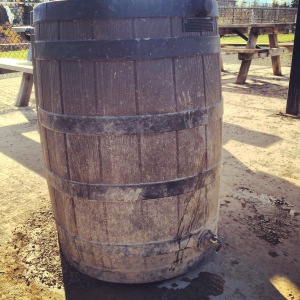 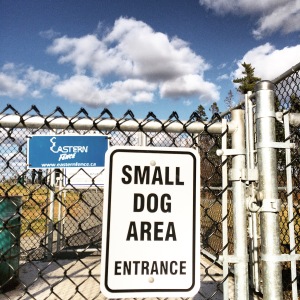 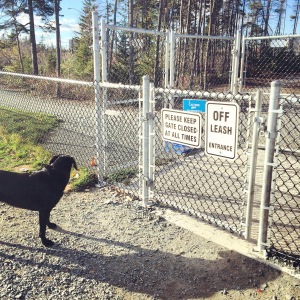 As for being a substitute for the Africville Park?  I’m not buying it.

First off, I would guess that most of the former Africville Park goers were North Enders.  North Enders without access to a vehicle have no hope of being able to enjoy the Mainland Common Park… That is, until we start letting dogs on city buses (which I think is a fantastic idea but I might be in the minority on that one).  North Enders are now left with pretty limited options in terms of dog-friendly areas within walking distance.

Second, I don’t pretend to know the actual dimensions of either park, but the Mainland Common Off-Leash Park seems to be a fraction of the size of the once-glorious wide open (and picturesque) running space at Africville Park.

Third, let’s be honest with ourselves.  The Park is less than a year-old and has already become a fenced-in dirt patch.  See Exhibit A above and Exhibit B below.  We weren’t there on a rainy day but I would guess it gets pretty muddy.

I hate to be a downer about HRM’s newest (and “best”) free fenced-in dog park.  But as a wise man once told me, there are no two words in the English language more harmful than “good job”.  I believe HRM can do better.

Still, if you’re looking for a completely fenced-in place to play, it’s a solid option, and the treed area actually is quite nice, if small.

And the Mainland Common itself is becoming a lovely destination for (strictly on-leash) walks in the woods.  We loved the newly developed Mainland Common Loop.  It took us about twenty minutes to complete, which included stopping to snap a few photos.

What are your thoughts on the Mainland Common Off-Leash Park and surrounding trails?